I began moving all of my domains from GoDaddy last week in response to their support of SOPA.  I think that this piece of legislation is reprehensible and sets the United States on a path down a slippery slope where censorship is the norm.  To be honest censorship is one of the scariest things that could happen in a country. 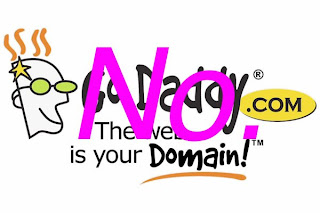 I would like to say that the actual move of the domains was relatively painless, but it wasn't.  I had heard reports of GoDaddy doing nasty things to make the transfer of domains take longer, and given that these kind of actions can carry stiff penalties for domain registries I assumed that they were largely blown out of proportion and that it would not happen to me.  Let's just say that I should have expected nothing less than the worst from a company that has spent the last few years sucking.  They have been a terrible registrar, but the inconvenience has stopped me from moving until I heard about the SOPA support.

I am a little ashamed of myself for not moving my domains over the elephant slaughter by their CEO, Bob Parsons.  I have also been embarrassed about doing business with a company that uses blatant low-brow and crude sexual advertising.  I love a beautiful woman (I married her), but when I hope that none of the professional women that I have worked with do a whois lookup on one of my domains revealing that I have a domain registered with GoDaddy - it can't be a good sign.  What does having a domain with GoDaddy potentially say about me?


I am pretty sure that none of these are true, and I am going to be more aware of what my purchases say about me as a person.  This is important because our purchases do say a lot about who we are.  Purchasing power is (at least in the US) the most powerful weapon that we have against big-business and their pupet of a government.  Let's explore this for a minute...

Reddit users proposed a boycot of GoDaddy on the 29th of December, and due to a large number of people proactively moving their domains in the days leading up to the 29th GoDaddy did a full turnabout on their SOPA support.  I have no doubt that their public stance is different from their true intentions and their response was too little too late, but the fact is that when their users started walking away the company listened real quick.  I still moved my domains because GoDaddy has given me plenty of reasons over the years and this was just the straw that broke the camel's back, but it was still pretty evident that this type of tactic is effective.  Compare that to the occupy movement that is taking place all over the country - there has been a lot of fuss but no one is listening.  The protesters are still sleeping in the cold, and the bankers are still getting their bonuses.  But the protesters are still walking in their Keen Sandals over to the Starbucks and paying with their Visa before sitting down with their iPad.  I am not saying that any of those things alone is bad, but if you want to change big business then you have to go after their business.

The best piece of advice that I have heard came from a friend that owns a popular restaurant here in Chapel Hill, NC.  He was talking to a bunch of protesters staying at the occupy camp down the street from his business, and he told them that the best way to get a big banks is to go after their income - use cash.  The idea is that small business owners like himself pay huge sums of money to the banks in the form of fees for debit and credit card purchases, and if those fees stop rolling in that the banks will eventually become weaker over time.  I was skeptical at first, and I am still not 100% convinced that the scale of these payments are enough to be effective, but maybe it is like a death of 1000 cuts.  At any rate, even if it is not effective at sticking it to the big banks, it will be effective at helping small business owners and keeping more funds in the community and off Wall St.  This is the easiest to do since we eat/shop in these places already and all we have to do is remember to hit up the yuppie food stamp machine (ATM) before hand.

For other big businesses, the changes in our personal habits may be a little harder to absorb, but it is a necessary change if we want corporations that act with social responsibility.  We have to vote with our dollars.  For this to be truly effective we will need more transparency in campaign contributions, but if a company backs a candidate that I think is harmful for the advancement of our society then maybe cutting off their revenue stream is the most effective means of changing their mind.  The first thing that I see that may need to change is how me and my family entertain ourselves.  The entertainment industry has really gotten too big not to fail.  They have their fingers in everything and have proven that they can easily move Washington with their wallet.  Since paying cash is not going to be effective here we are going to have to start paying attention to which studios are doing good things with our hard earned money (non of the major ones).

The biggest problem here is that I see little chance in convincing the larger population to boycot any movie studio because (i) it requires though and investigation, and (ii) there are often not convenient and equal products to substitute.  Just like the majority of people are not going to sleep on the hard cold ground to effect change in a corrupt partnership between big banks and the government, few people are going to skip watching the latest big budget film because the studio is lacking scruple.

I am not expecting large and lasting change any more.  Maybe I am just getting syndical as I get older, but wouldn't it be nice.  Still, I am going to do my best to do my part and I hope that a growing number of people will find their own solutions.  As for GoDaddy...  I have moved all of my domains and deleted the ones I couldn't move.

There is no shortage of articles on this topic but this one titled Stupid GoDaddy Deserves Boycott is particularly great.  "If GoDaddy were to just go away, the world and Internet would be a better place. If I had any domains there to pull, they would already be gone.
Posted by Unknown at 12:00 PM
Email ThisBlogThis!Share to TwitterShare to FacebookShare to Pinterest
Labels: GoDaddy, Internet, Occupy, Politics, Rants, SOPA
Newer Post Older Post Home