Abstract: At least one person (a must read post) in Washington explicitly wants to censor the Internet and our attempts to stop it may just be giving them more motivation to do it.


This is the kind of thing that I could do without knowing, but it kind of confirms my thoughts on the subject.  SOPA and PIPA may have started out with big money from the entertainment industry as a way to protect an aging business model, but soon Washington realized what an opportunity this was.  The first step down a slippery slope where a central body has control over what gets published on the Internet, and they get to do it under the guise of protecting an industry's "intellectual" property.  The technically literate community is irate...
Let's think about that for a minute.  Does everybody have their tinfoil hats on?  Great, let's begin.


The Internets are pissed
(how we see things)

Who are the Internets for the purpose of this discussion?  They are the people that are active participants in the web of information exchange.  That is they use message boards, social media sites, and other means of exchanging ideas with others like them.  For examples see postings on Slashdot, reddit, Hacker News, and the list could go on and on...
Somehow (it does not really matter how at this point) the Internets got wind of these really bad pieces of legislation that were trying to get pushed through.  It was shared among us and the shared response was like something out of a scene in Braveheart.  In my mind reddit is as close to a William Wallace as we've come, but our reaction has been in general to attempt to stir up as much dissent among the Internets and hopefully the average American as possible.  Why not?  After all it has worked pretty well in the past.
We have done a good job about voicing to the technical among us that SOPA and PIPA is bad and there is none that I know of that are in support of it (or at least that dare to mention it).  Something strange was happening though, none of the major news outlets (read - things my parents would see) were covering it at all.  It wasn't that we were not being loud enough about it; they don't want to cover it.  They want to bring as little attention to it as possible, and that means not trying to spin it as positive (a hard feat indeed) but not talking about it at all.  Recognizing this issue reddit is leading the charge with a way to make sure that we are getting everyone's attention - make people mad.  The claim is that by blacking out popular Internet services that you can illustrate to people what a censored Internet would feel like and prod them to action.  As Forbes pointed out blocking reddit wouldn't be enough and is in a sense preaching to the choir.  They claimed that Google and/or Facebook needed to join in to make this truly effective.  I thought this just might work.
Imagine if everyone in the US got a message to call or visit their representatives when they visited Google or Facebook.  The response would be unprecedented.  It would show for the first time how powerful the Internet could be - the "nuclear option."  How could it not work right?  If most of the country is calling you really irate and threatening to throw you out of office if you vote for SOPA, are you going to take that chance?

The Internets are causing trouble again
(how they see things)

There is a certain amount of smug pride in being a member of the old guard in Washington and some representatives use the fact that they don't use the Internet and don't care to know how it works as something of a bragging right.  For most of them the Internet is something of a toy or an annoyance.  Then comes the Arab Spring.  All of a sudden the Internet becomes a force for leveling the playing field not only in business, but also in the struggle and dissemination of governing power.
Imagine that you are a representative and people are calling you left and right telling you that they don't want you to support SOPA/PIPA.  On one hand the entertainment industry has a lot of power in the US and they are stuffing your pockets with wads of cash if you are willing to play ball, but on the other hand if people are angry enough you might loose your job.  The tension really starts to heat up when you start hearing about the "nuclear option," and you realize that larger portions of your votes are at risk.
If you vote against SOPA/PIPA then you are going to lose the support of the massive entertainment industry, and make your constituents really happy (until the next thing that comes along they don't like).  But doing this confirms for those pesky Internet folks that they have a lot of power, and sets a precedence that threatens your future income from lobbyists and their clients.
If you vote for SOPA/PIPA then you are assuring long term support from the entertainment industry, and the framework will be in place to silence whatever critics might arise in the future.  Since the majority of your voters will move on to whatever reality TV bullshit is trending or the latest shiny toy in a few days anyways, what's to risk?  Possible short-term lost, but a very substantial long term gain.

This is just crazy talk!

By doing what we thought was best at the time - raising awareness about an important issue - I fear that we may have given the politicians more incentive to implement a framework for shutting us up.
Think about it - the more the Internet flexes its muscles the more the politicians see it as a threat and the harder they will fight to cripple it.  They are getting closer to the point where they risk losing everything and may result to extreme measures to protect their position of power.
The truth is at this point that at least one of our leaders see this as a golden opportunity to silence a very vocal minority.  Civil liberties are rarely lost over night, but it is a gradual descent.  We will not be North Korea over night, but as Benjamin Franklin put it, "those who would give up essential liberty, to purchase a little temporary safety, deserve neither liberty nor safety."  I can't help but think about that now every time I have to fly. 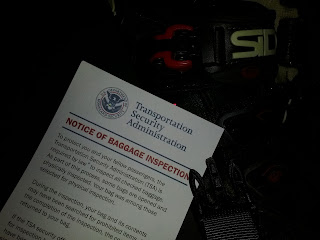 I hear myself and know how crazy all of this sounds.  Hopefully this will all disappear soon, but this one didn't.
Posted by Unknown at 12:26 PM
Email ThisBlogThis!Share to TwitterShare to FacebookShare to Pinterest
Labels: geek, Internet, News, Politics, Rants, SOPA
Newer Post Older Post Home